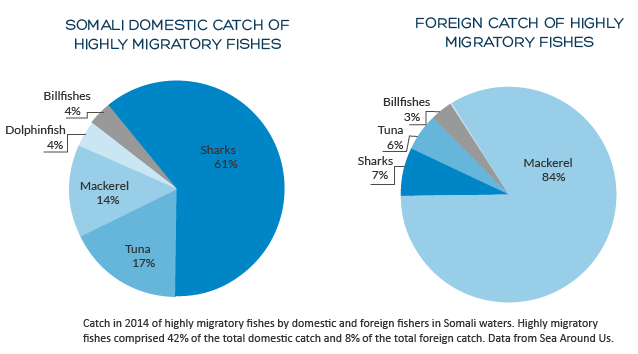 Highly migratory fishes are extremely valuable and popular in local and international markets. The high demand for these fishes means they are an important source of revenue for Somalis and for foreign vessels fishing off the Horn of Africa. In the domestic fishery, highly migratory fishes are more than 40% of total catch. For foreign vessels fishing in Somali waters, these fishes are currently a small portion of their total catch because most fishing for highly migratory species is occurring outside the Somali exclusive economic zone. In the Somali region, there is untapped revenue to be gained by implementing a licensing system for large-scale, foreign, commercial vessels that are interested in fishing legally in Somali waters. There is also great potential to improve processing and export capacity for fish caught by the domestic, artisanal fishery.

Sector expansion depends on the sustainability of the underlying natural resource. Unfortunately, many species of great commercial importance currently are fished at unsustainable levels, including sharks, most billfish species, and many tunas and mackerels. Strong laws, data collection and reporting, and adhering to the recommendations of the IOTC will be imperative to maintain these lucrative fisheries for Somali economic benefit.

In Somali waters, sharks are especially at risk. They are often targeted by domestic and foreign fishers for their fins which can be dried and sold in Asia for shark fin soup. Sharks are often snagged as bycatch on longlines (lines of baited hooks suspended in the water) and in purse seines (large nets that surround and catch schools of fish) targeting tunas, mackerels, and billfishes. Although the IOTC collects catch data on sharks, they do not regulate shark fishing, which is occurring at unsustainable levels. Despite a global increase in regulations on shark finning (the practice of catching a shark, removing its fins, then throwing the rest of the shark back into the sea), the extremely high value of shark fins perpetuates a black market for them.

Recreational fishing and the tourism it would drive is one potential opportunity to promote a sustainable future for highly migratory species in Somali waters. Billfishes, dolphinfish, and many types of tuna are prized by the sportfishing community. Their large size and speed supports recreational industries throughout the world. The present security situation in the Somali region prohibits international visitors, and no recreational fishing currently occurs in Somali waters. But this may be an area of future development, especially since a well-monitored catch-and-release fishery could be the basis of a sustainable business model.

This work is licensed under a Creative Commons Attribution-Noncommercial 3.0 Unported License (CC-BY-NC). For more information and for data downloads see www.aquamaps.org.

Sea Around Us. “Catches by Taxon in the waters of Somalia.” Tools & Data. Accessed August 16, 2017. http://www.seaaroundus.org/data/#/eez/706?chart=catch-chart&dimension=taxon&measure=tonnage&limit=10

Secure Fisheries is a program of
the One Earth Future Foundation