A view of aquaculture cages on Lake Victoria. Paige Roberts.

On the shores of Lake Victoria, I discovered what it must feel like to be an alien out of a science fiction movie. Like a foreigner from another planet who looks different from the locals and does not speak their language, I had been there many times before, but this time, I arrived with a spaceship. Or at least something resembling one. I was there to fly a drone over the lake to make a detailed map of aquaculture cage locations, an important first step in understanding and sustainably developing aquaculture in the lake.

Pulling up to a fishing village and setting up a drone often created quite a stir. As more people saw the crazy contraptions we were using, word spread, and crowds began to gather. In some locations near schools, children and teachers came out to see what we were doing. With the translation help of our local research colleagues, we would explain what we were doing and why, then take off!

With 20 minutes or more per flight, adding up to hours at one site, we had plenty of time to show the crowd how the space-age technology works and let them see the pictures of the lake in real time as the drone took them, hopefully making the technology more relatable and less alien. 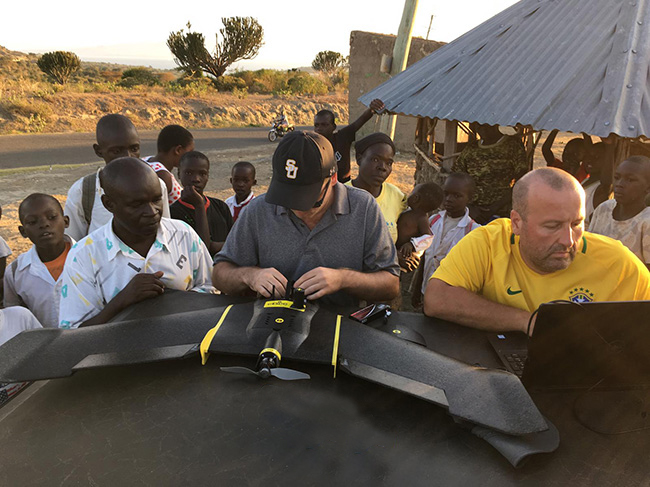 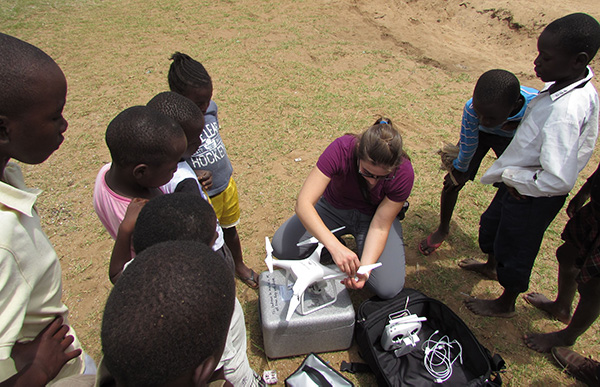 Crowds watch as the drones are worked on in between flights. Left photo by Paige Roberts, right by Noah Kratch.

Aquaculture in Lake Victoria is a relatively new but growing industry, and its impacts on the region are not well understood by scientists or regulators. Cage aquaculture consists of large cages made of metal, PVC, or netting that float in the lake just offshore. They hold young Nile tilapia (called ngege locally) until they are large enough to sell and eat. The premise of fish farming is simple, but the effects on the lake ecosystem and the people who depend on it are more complicated. 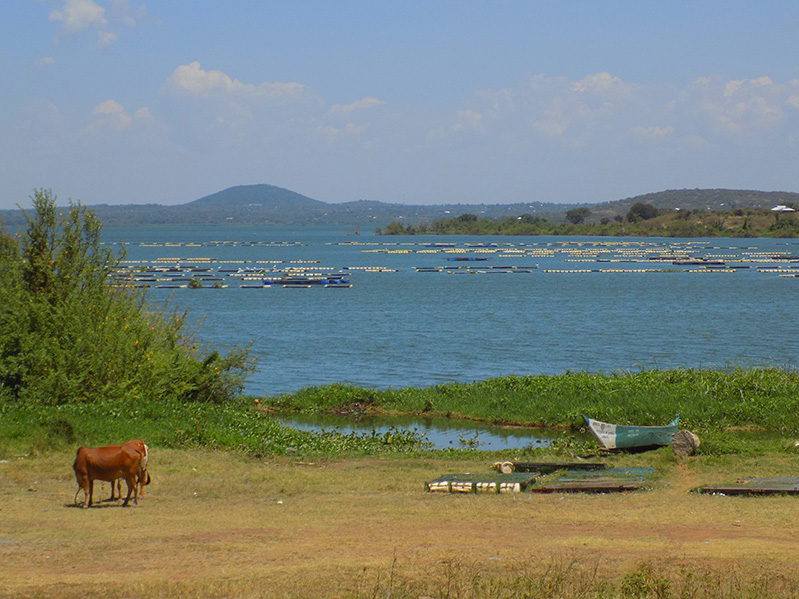 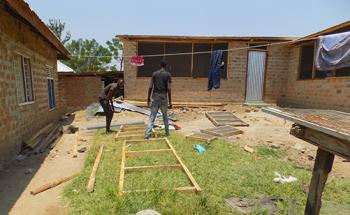 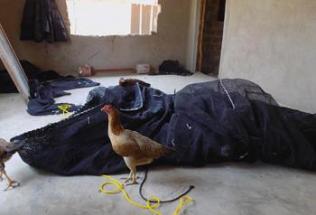 To better understand these effects, Secure Fisheries partnered with the scientific research institutions from Kenya, Tanzania, and Uganda; the Lake Victoria Fisheries Organization; and three North American universities on a National Science Foundation (NSF) grant. The research approach combines many disciplines including ecology, social science, and geography to increase our holistic knowledge of lake physical dynamics, ecosystem dynamics, biodiversity, the economy that depends on the natural system, and the positive and negative effects of aquaculture on all of these. With this information, decision-makers will have the knowledge to regulate where aquaculture should be expanded or limited.

Before any of those decisions can be made, regulators need to know exactly where the cages are, how they may be changing the lake environment, and what locations have conditions more suitable for rearing fish. Developing a detailed, high-resolution map of cage aquaculture locations will allow us to pair those locations with environmental and physical data collected in the field, creating a more complete picture.

So, what do drones have to do with aquaculture? Drones, or unmanned aerial vehicles (UAVs), are the most efficient way to find the exact locations and extent of cage farms in the lake. Scientists at the three lake research institutes know the general locations of cages, and in some cases, they are visible in freely available satellite imagery. However, satellite imagery is often outdated and of inadequate quality to see the full extent of cages at a location, which can hold anywhere from a few cages to many hundreds. Flying a UAV over a known cage location allows us to capture high-quality (5 cm resolution) images of all the cages, their precise geographic location, and the surrounding area. Not only does this allow us to make a detailed map of the cages, but it offers additional information about nearby shoreline habitat, which can impact local water quality. 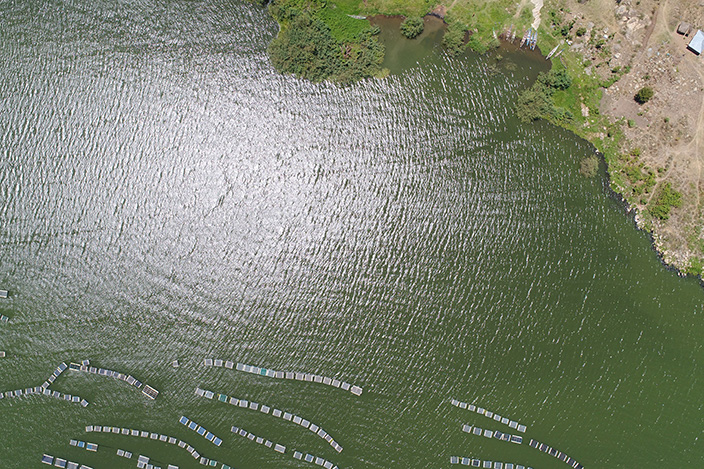 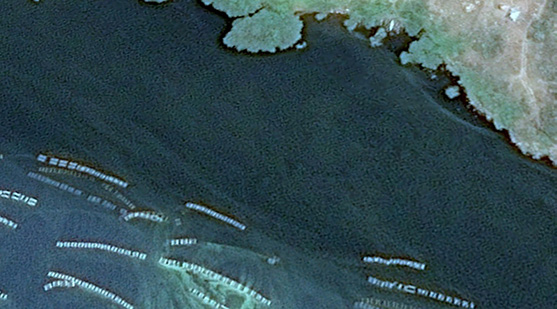 To conduct this aerial photographic survey, the principal investigator for the geographic information systems (GIS) portion of the NSF grant, Dr. Stuart Hamilton from Salisbury University; a graduate student, Noah Kratch; and I brought two UAVs to the Lake Victoria region: one multi-rotor and one fixed-wing. The advantage to the multi-rotor is its ease of operation and picture quality, while the fixed-wing drone is more efficient, enabling it to cover a larger area. Controlled by a tablet but limited by battery life, the multi-rotor drone worked well for smaller bays. Because it can hover in one place, its pictures are crystal clear. 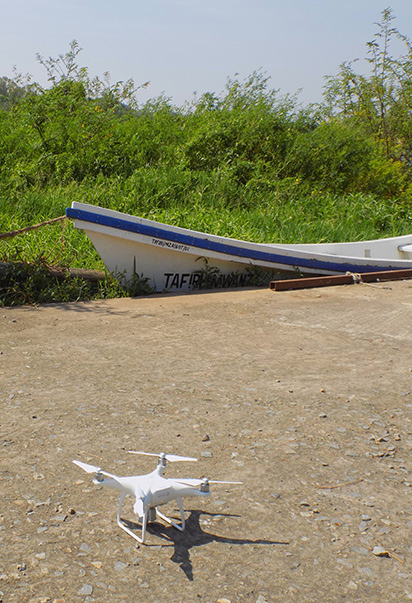 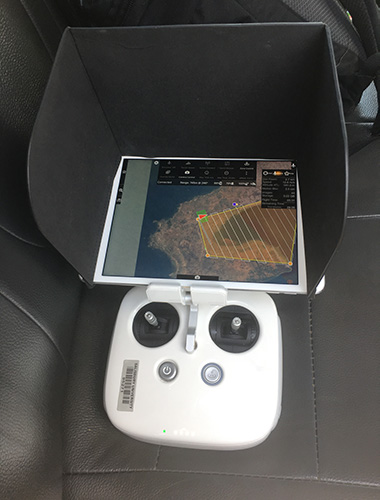 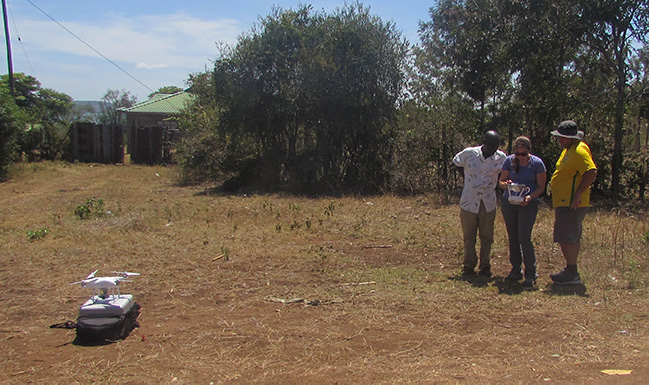 With only a single propeller and the ability to glide, the fixed-wing drone can fly higher and farther than the multi-rotor but has slightly lower photo quality due to its higher altitude and inability to stop midair. Combining the two allowed us to cover many of the major aquaculture areas in Kenya and Tanzania, with Uganda to be completed soon.

Unlike most lake research that requires being on or in the water, we simply piled into a truck and drove to our sites. The drones have an internal global positioning system (GPS), so once we found a suitably clear area near a previously identified aquaculture site, the drones recorded that “home” location and were programmed to return to us when their batteries ran low.

The drone landing at the "home" location, footage by Paige Roberts.

Our crowd often remained riveted throughout the flight. We enlisted the children’s help in spotting the drones when they were flying overhead, as well as clearing the landing area of livestock, which had a pesky habit of wandering into our site just before the drones touched down.

Though our high-tech methods starkly contrast with the remote, mostly disconnected communities we were in, the impact of the research could be significant. This technology and the maps it creates will help inform the future of Lake Victoria’s aquaculture development to benefit those curious children, parents, and teachers who depend on the lake for food and income. 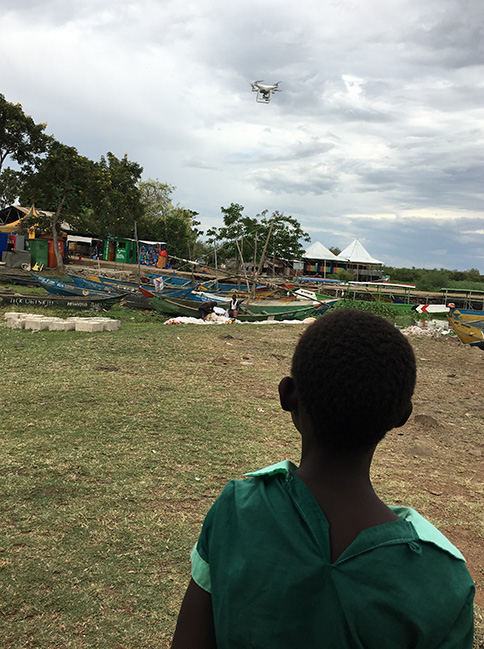