In this multi-part blog series (see here for Part 1 and Part 3), our team in the field explores the mounting conflict over fisheries in Lake Victoria, and the critical role of biodiversity and conservation in promoting long-term food and economic security in the region.

Lake Victoria, Kenya - Our small boat is listing heavily to one side as six scientists lean in anticipation toward the incoming fishing net. Finally, after months of planning, there it was—our first glimpse of an iridescent haplochromine! We are in Kenya conducting a survey of these small, brightly colored fishes, commonly called cichlids, in the nearshore waters of Lake Victoria. Knowing where these fish are plentiful and diverse will help us understand the effects of rapidly spreading cage aquaculture on lake habitats.

Along with a crew of Kenyan scientists, technicians, and boat crew, led by Dr. Chrisphine Nyamweya, we are living aboard the KMFRI research vessel, the R/V Uvumbuzi . This 18 m long ship is our mobile laboratory and launching platform for smaller boats that set and pull three fleets of gillnets. We are all new to describing haplochromine biodiversity, so we are learning as we go. 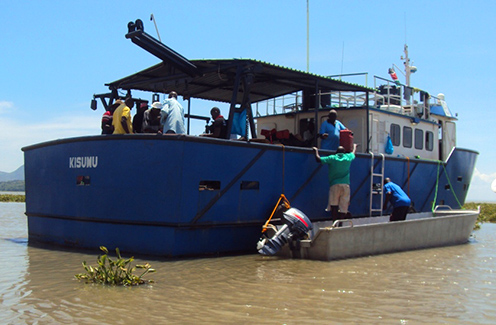 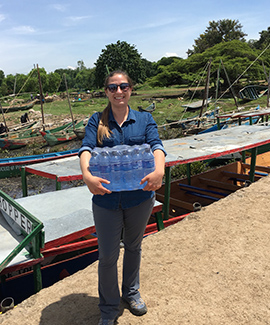 The preparations for this survey were extensive. Ensuring everything we would need is on board—from food, to equipment, to lab supplies, to lots of drinking water— was critical and sometimes more difficult than we expected. For example, we needed clove oil to humanely euthanize the fishes we would keep for future identification and cataloguing. It took three of us more than four hours asking at every grocery and health store in Kisumu to find 10mls of clove oil.

Heading Out to the Open Lake

When we were finally ready to go, the Deputy Director of Freshwater Systems for KMFRI, Dr. Enock Wakwabi, officially launched the survey.  It is a tradition for the senior official to send off a big survey like this one, but it also served to highlight the importance of this project to advancing lake science and understanding the connections between human activities and the health of the lake. Having the funds and capacity to conduct a survey like this is rare. The last lake-wide gillnet survey happened more than 20 years ago, so this survey is crucial to understanding the current dynamics in the lake and how they will affect the Kenyan people who depend on it.

We also have the opportunity to collect information on more than just fishes. It is a team effort, with participants sampling water quality, plankton, other fishes, and plants. It has been incredible to see so many people doing disparate activities and operating effectively in a very small space. The rocking boat makes everything we do more difficult: rigging the nets, sorting the samples, laboratory work, and cooking and eating. Even bathing and sleeping is an experience!

So far, we have completed five days of sampling in the northern part of the Kenyan portion of the lake. Our main goal here has been to catch haplochromines, but on the first two days, we barely succeeded and only caught nine fish in total. There could be many reasons for this, including water quality and habitat characteristics. However, catching few fish might have been a blessing in disguise because the process of cataloguing the haplochromines had a steep learning curve made more challenging by the surprises thrown at us while in the field. 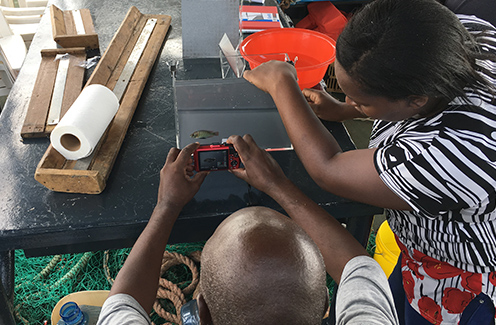 Anyone who does field work learns to expect a challenge. Over the last few days, we have faced quite a few, some foreseen and some total surprises.

In the waters near Kisumu, an invasive floating plant, the water hyacinth, has taken over the lake. Navigating it has been one of our biggest challenges and caused us to eliminate one of our sampling sites immediately. Before the survey, the research vessel had been marooned by thick mats of this weed, and we even got stuck in the middle of a huge hyacinth mat while moving between sites one night. The hyacinth caused many issues with setting and retrieving the nets, especially those designed to catch fish besides haplochromines. The team spent more hours untangling the nets from pieces of hyacinth than they did fishing the nets during the first two days.

Competing for space in the lake with local fishers has been another challenge. Once, the propeller of our small boat’s engine got tangled in fishing nets set earlier. The fishers’ nets were illegal monofilament nets hidden in a protected fish breeding ground. The net was very long and had already caught approximately one hundred breeding Nile tilapia (Orechromis niloticus). Our team rescued and released some of the tilapia as we pulled in the net. 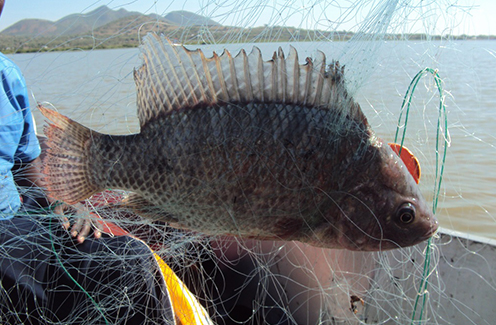 Since that day, we have encountered illegal monofilament nets at nearly every sampling site. These nets are illegal because they catch fish at unsustainable rates. This is a problem throughout Lake Victoria that does not have an easy solution. The nets are outlawed to protect the fish, but legal nets are not efficient enough for a fisher to earn a decent living. Many fishers are left with no other option than to use illegal gear, which is cheap to procure (and the fines levied when caught are too small to serve as deterrence).  To many, illegal fishing is worth the risk to sustain their livelihoods.

Aquaculture is one possible way to supplement fishing income legally. In the Kenyan portion of the lake, cages of tilapia are common and we have purposefully chosen to sample at sites with cages to compare them to sites without cages. Current estimates are of more than 2,000 cages in Kenya alone. 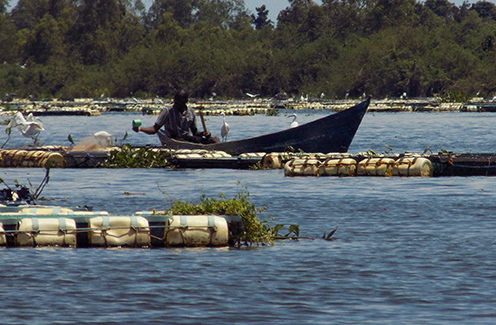 We have faced other challenges along the way. One day, a huge rainstorm waylaid us for four hours. Another day, we lost a net to a strong current. Each night we stay up late taking tissue samples from haplochromines to help us identify them and learn more about their habits. However, we have persevered and every day runs more smoothly than the last. We are constantly anticipating the stunning and unique species we will catch tomorrow. The diversity and beauty of the haplochromines has been astounding.

We will hear what’s happening with the Tanzanian team in the next blog installment. Until then, the Kenyan survey team soldiers on!